​Over thirty CKCA members enjoyed Saturdays Drive and Dine to the Breadbasket in Newton. The morning mist cleared and everyone enjoyed the scenic drive. The food and service was excellent and we returned home in time for our well-deserved afternoon naps. Thanks again to Dennis Nicklin and Karen Ukens for organizing the outing.

Special thanks to Randy and Susan Puls for providing the attached photos. 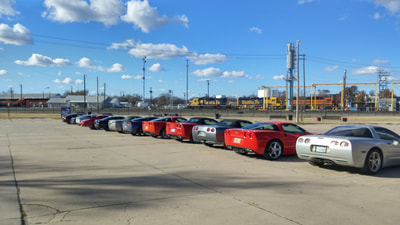 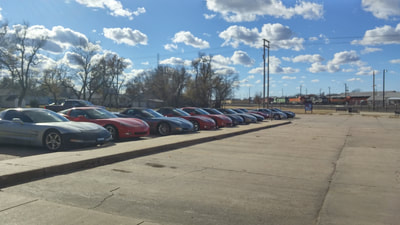 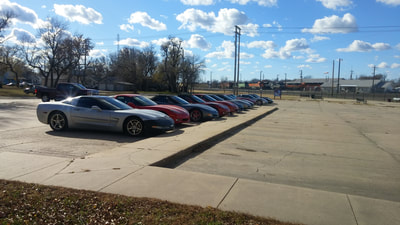 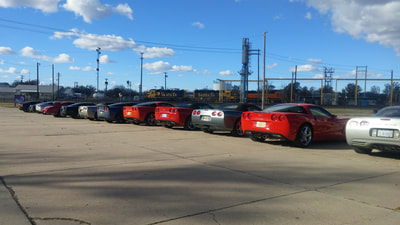 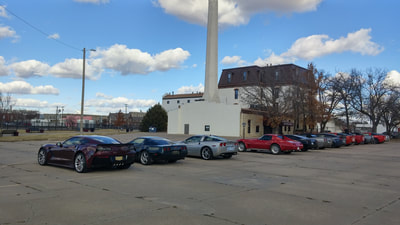 Saturdays forecast was dicey early, however the afternoon and evening storms skirted southeast of Hutchinson and the Drive & Dine to Turon went on as planned. Bill and Marj Westfahl led the group of 10 corvettes (and two non-corvettes) southwest of Hutchinson on ‘Old Highway 50’ through the small towns of Partridge, Abbyville, Plevna and Sylvia and then south to Turon. Bill and Marj even found a few *curves along the way. Several members commented they wished they had worn their ‘driving gloves’. There were ‘unsubstantiated’ rumors that a member might have “dropped an F bomb” upon arrival in Turon.
​
*Quick history lesson: Correction Survey Lines - https://www.geocaching.com/geocache/GC122YE_correction-survey-lines-i?guid=0c81bc36-f1fe-4fdd-a023-1db674781671
​
Barb (Barb’s Bar & Grill) and her friendly wait staff immediately welcomed our group and brought cold beverages (they were well deserved after the drive); Susan and Randy Puls were the lucky winners of a FREE BEER courtesy of the Westfahl’s; the Puls were the first to solve the misspelling errors in Bill’s pre-drive & dine message. Kevin finished a close second and also received a FREE BEER from the Westfahl’s. CKCA members and two guests (23 total) ‘covered the gamut’ by ordering Chicken Fried Steak, Chicken Fingers, Ribeye, Filet, Hamburgers and Chicken Gizzards (Bill said the gizzards were outstanding). The food and service was great and everyone seemed to enjoy the afternoon and evening.
Thanks to Bill and Marj for hosting the outing.
​
Attached photos provided by Bill Westfahl – ‘Go Pro’ video (Highway 50 homebound) provided by Kevin Brown. 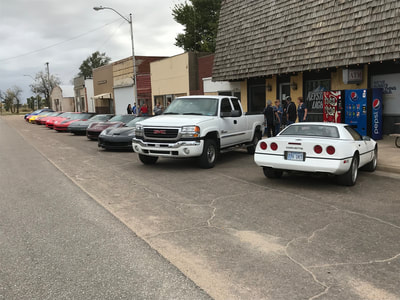 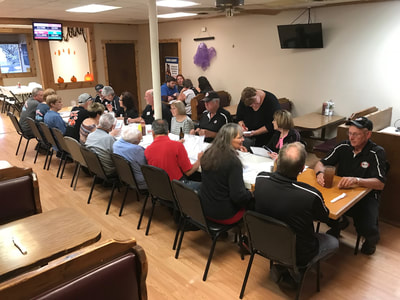 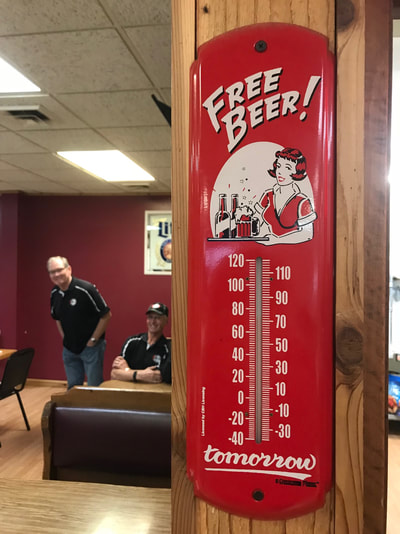 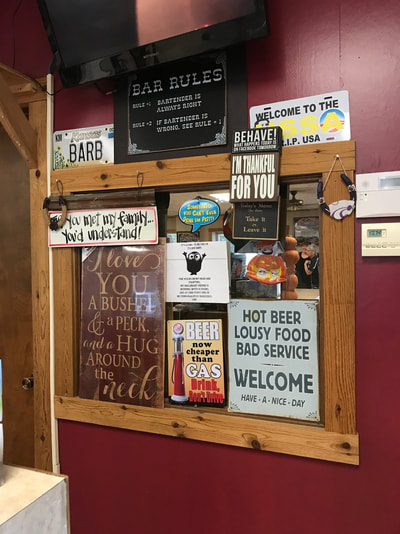 A thank you to Jim and Debby Gruver for planning the August drive to Caldwell. The skies were overcast, but made a nice drive. The Strawder’s had to scramble to put up their convertible top when the rain finally came just a few miles from Caldwell. Bowling was fun. All agreed it was years since being on an alley. Maybe look for future bowling adventures. 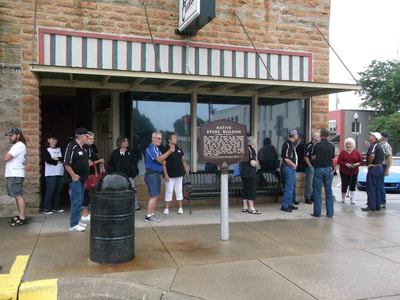 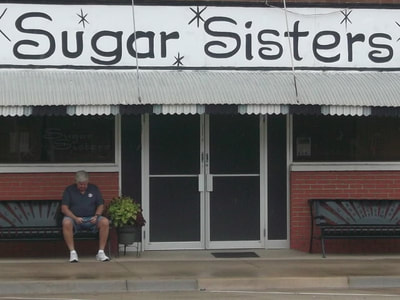 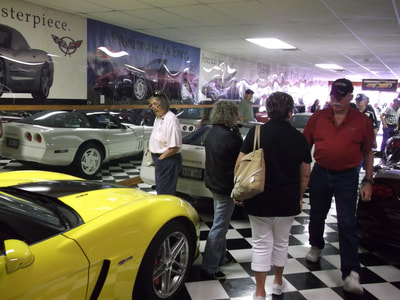 The club had a good time & there were 34 folks & 18 vettes! We got to do a ceiling tile with everyone’s signature & it had our club logo on it! Got a few pictures, but I know someone else took more shots! 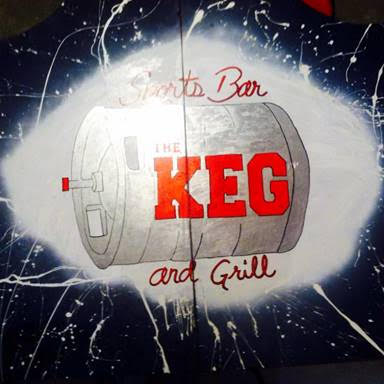 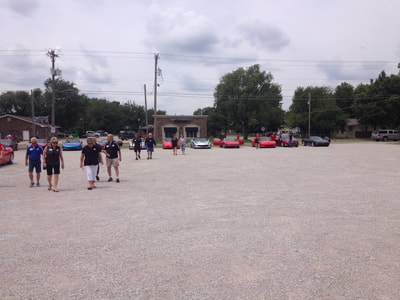 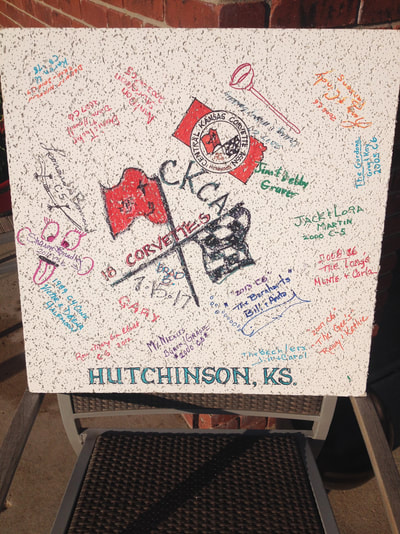 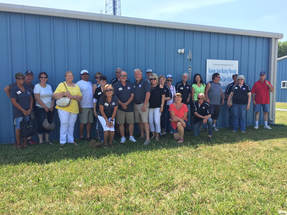 Thanks to Jack and Lora Martin for planning the nice cruise through the Kansas countryside, June 17. Twenty four members attended, and Darwin and Nadine Henry met the group in Abilene  to join them for dinner. The Kansas Auto Racing Museum in Chapman was interesting-didn’t know so many Kansas guys were famous in racing. Ike’s Place Bar and Grill in Abilene was very good. It would be a great place for a return visit. We could have done without the 100 degree heat. Our convertible top went up and the A/C put on high!
​

Saturday’s weather was in the near 80’s and was a short jaunt over to Moundridge, even a few T-tops came off. Twelve Corvettes made the trip over and the Henry’s were waiting on Main Street to meet up with the group. Quincy’s had the brisket buffet ready with drinks soon dispensed. We enjoyed a private room and many stayed to visit after the meal. Thank you for participating.

Orvin and Peggy Miller hosted Saturdays Drive & Dine to Zenda. Forty-five people (25 corvettes) traveled ‘scenic byways’ through small towns like Yoder (dame), Mount Vernon, Murdock, Rago, Spivey and Zenda.
The caravan arrived at five and the ‘locals’ began showing up to see the ‘array’ of corvettes lining both sides of main street. Once inside, we were greeted by the friendly Lumberyard Steakhouse staff; they had reserved a large private room for our group. The service was outstanding and everyone enjoyed a delicious meal with generous portions; ‘to-go’ boxes were handed out after the meal.
Special thanks to Orvin and Peggy for hosting the fun event.

P.S. Every third Saturday of the month they have their ‘highly popular’ seafood buffet; something to consider for a future event.

“Zenda, Kansas was founded in 1887; located in southern Kingman County (KM) on highway K-42. The town sits between the highway on the south and grain elevators on the north. The paved road south out of Zenda winds its way through a surprisingly hilly and beautifully scenic route.  A forest of wind turbines stretch along ridges spinning languidly in the Kansas breeze.”
​ 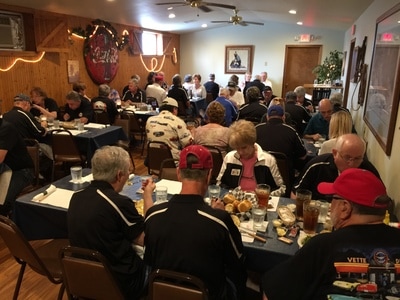 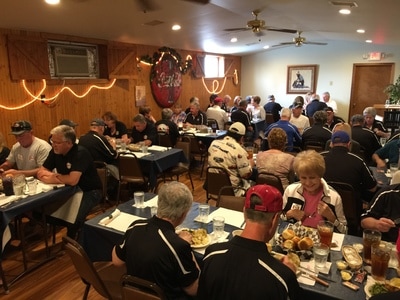 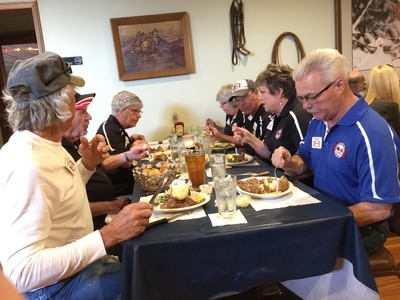 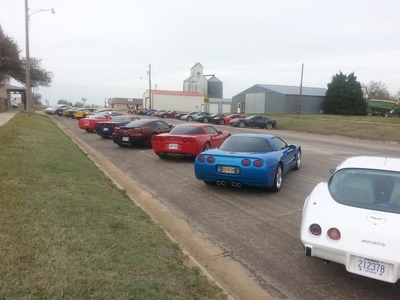 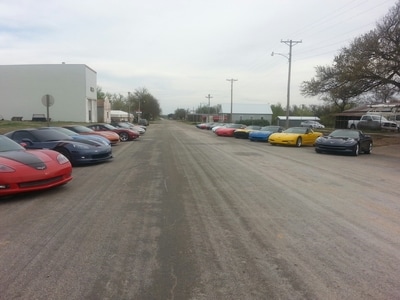 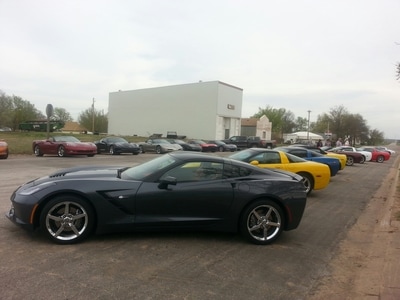 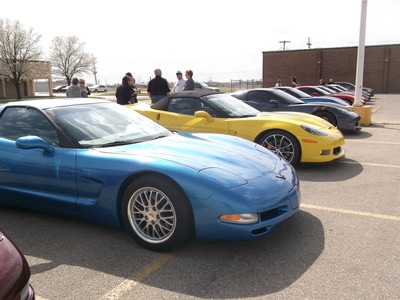 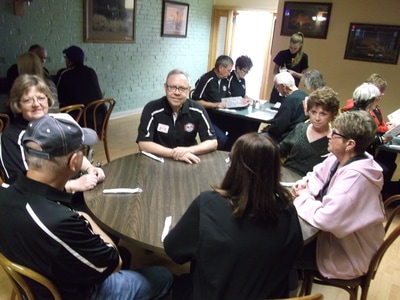 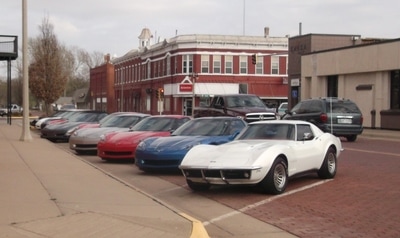 We had a great turnout of 38 members and guests for Saturday’s drive and dine to Grumpy’s Steakhouse. The weather was in the 70’s for the 22 cars that cruised to Kingman, with a side trip to test the curves west of Cheney Lake. Once again Grumpy’s met the challenge of serving a large group with good food and drink within a short time, and there was even cake!